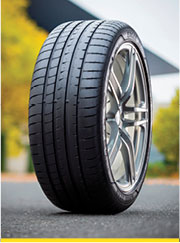 Goodyear is proud to announce its new tyre, the Eagle F1 Asymmetric 3: the Ultra-High Performance tyre that delivers shorter braking distance on dry and wet roads1, helping drivers to stay in control and ready to enjoy the journey. With proven Eagle family test wins and an impressive OE track record, it is Goodyear’s premium offering for outstanding braking performance, responsive handling and control in both dry and wet conditions. The Goodyear Eagle F1 Asymmetric 3 redefines tyre performance for powerful saloons and sports cars as well as their driver’s expectations.

Significant efforts went into optimising the tyre for outstanding safety and performance. More than 36.000 engineering hours went into the development of the tyre, including over 5.000 tests, 1.200 tests on the road and 3.800 on five test locations in five countries, covering a total of 330,000 km.

“We are very happy that the TÜV test confirms that the Goodyear Eagle F1 Asymmetric 3 delivers leading results in the braking test2, especially during more demanding situations such as rainfall” says Alexis Bortoluzzi, Goodyear Marketing Director Consumer EMEA. “After all, braking is the number one consumer need3, and particularly critical for high performance car drivers.”

The new Goodyear Eagle F1 Asymmetric 3 will be available in selected sizes in 17 to 20 inches.

Goodyear tyres win in the marketplace

Sport Auto has published their 2016 Summer test result in which the Eagle F1 Asymmetric 3 has come out champion. The test was done on a 235/40R18 Y tyre and conducted versus our latest competitor products like the Pirelli P Zero. 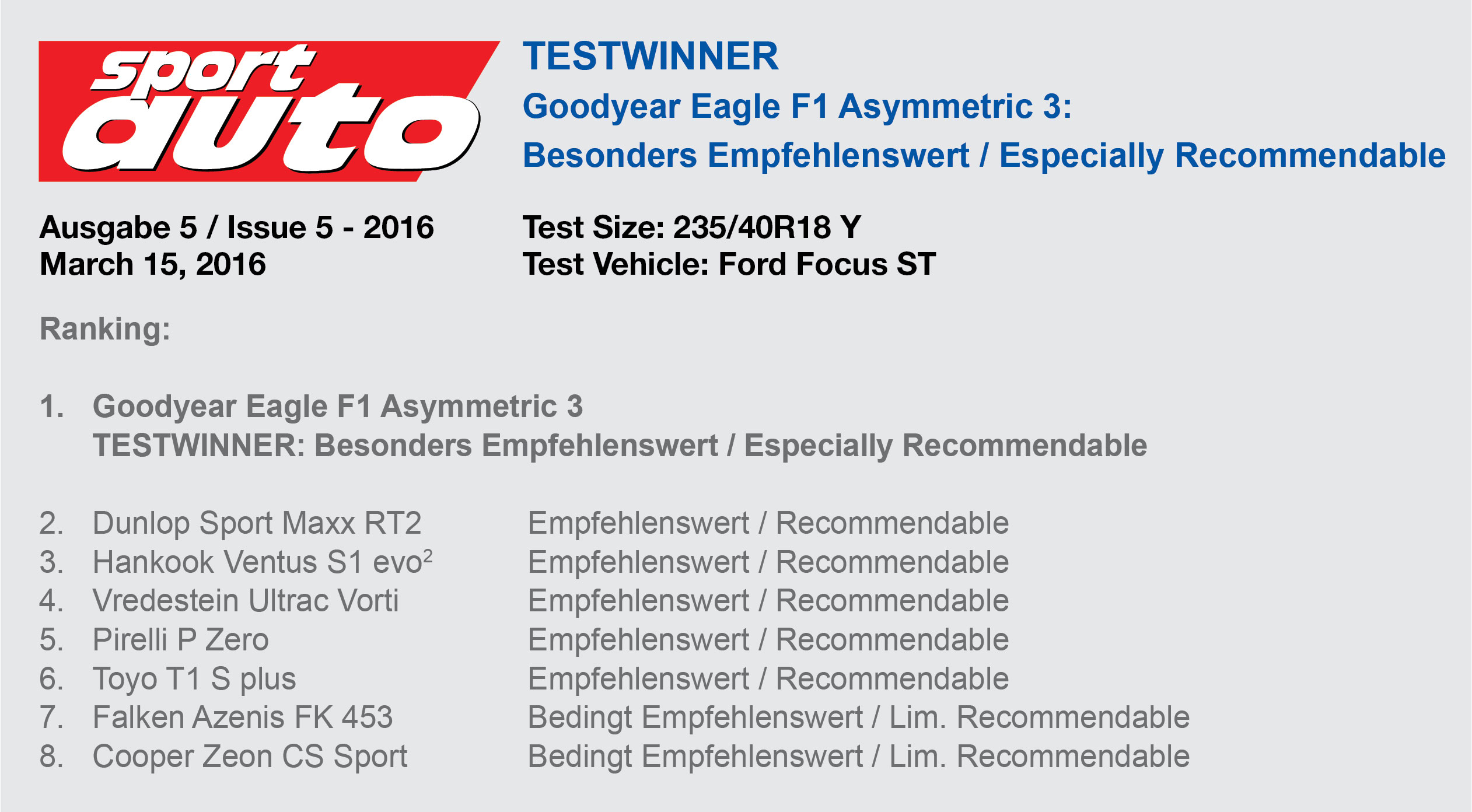 EfficientGrip Performance does it again!


We have a new test winner!

The EfficientGrip Performance has once again been crowned test winner, this time by Teknikens Värld.

The EfficientGrip Performance also placed second in the Summer HP tyre test run by Za Rulem. Both these new test results further build on the great portfolio of test results we have for this product.

In both tests we beat some our of main competitors products including the Continental PremiumContact 5, the Pirelli Cinturato P7 Blue and the Michelin Primacy 3. 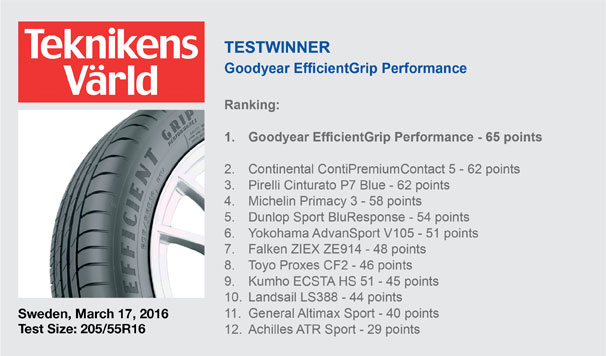 
We have a “best in test” win for the Goodyear EfficientGrip SUV from Auto Motor und Sport!

Further building on our impressive portfolio of test results this season.

In the test conducted by Auto Motor und Sport, which focused on braking, handling, cornering, aquaplaning, rolling resistance and tyre noise, the EfficientGrip SUV was the “best in test” receiving a very recommendable rating beating our competitors in the SUV segment including the Continental Premium Contact 5, Michelin Primacy 3 and Pirelli Scorpion Verde. 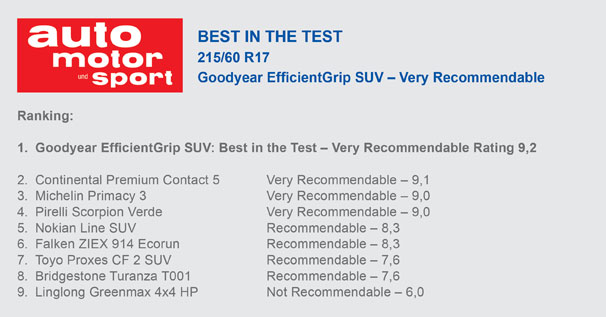 Goodyear South Africa is excited to announce a new and improved Goodyear website. 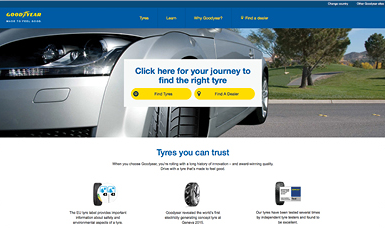 • It was designed using the latest   HTML5 software.

• The new layout is modernised   and user-friendly.

• The navigation is simpler.

• It is now cellphone friendly   and tablet friendly.

• It includes a guide to buying tyres.

See it for yourself at www.goodyear.co.za

Connect with Goodyear on Social Media

Digital media is one of the fastest growing industries in the world. It is changing the way corporations work. Digital media aims to close the gaps between communities and offers the chance to communicate freely with our customers.

This acclaimed auto show, of which Goodyear has been a part for over 30 years, is held in particularly high esteem by journalists, experts and buyers for its comprehensive view of current offers, new trends, available technologies and future developments – and this year was no different.

Attended by over 680 000* visitors and 11 300+* media representatives, the show featured all the latest innovations and offerings in the automotive industry, presented by manufacturers, exhibitors, service providers, garage owners, suppliers, sales persons and other automotive brand representatives.

One of the most talked about innovations at this year’s show was the model of a self-driving car, the car of the future, which some people claim will become a must in years to come.

Just like connected cars, self-driving cars make use of all the latest technologies – be they software programmes or high-performance cameras – to analyse the landscape by means of shape recognition, and then using algorithms to send instructions to the vehicle’s controls.

They might be the solution to reduce the number of accidents, traffic jams or even car parks in city centres (they would park on their own in suburban areas).

But of course, this innovative autonomous vehicle will need a very unique set of tyres…

* As recorded at the International Geneva Motor Show 2015. 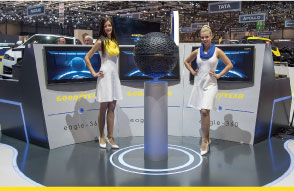 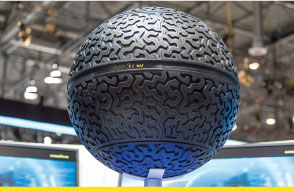 After 117 years of making tyres, Goodyear presented a vision of a future tyre that looks radically different from tyres today – it’s a sphere. Goodyear unveiled its latest concept tyre, Eagle-360, at the 2016 Geneva International Motor Show. The spherical, 3-D printed tyre highlights Goodyear’s vision for the future and presents an inspiring solution for when autonomous driving is expected to be more mainstream.

The unique spherical shape of the Goodyear Eagle-360 could contribute to safety and manoeuvrability to match the demands of autonomous mobility. The multi-orientation tyres move in all directions, contributing to passenger safety, and active technology allows the tyre to move as needed to reduce sliding caused by potential hazards.

In addition, the shape provides a smooth ride by creating a fluid, lateral movement. This helps the car to overtake an obstacle without changing its driving direction – and what’s more, as a 3-D printer produces the tread, customising the tyre based on the region where the driver lives is also a possibility.

Finally, because 360-degree turns are possible with this tyre, it could tackle anticipated parking constrictions of the future, as less space will be needed to pull into parking spots.

To connect with the body of the car, the Goodyear Eagle-360 concept tyre relies on magnetic levitation. The tyre is suspended from the car by magnetic fields, similar to magnetic levitation trains, which increase passenger comfort and reduce noise.

Goodyear imagined another feature, connectivity, to optimise driving conditions in autonomous vehicles. Sensors inside the Eagle-360 concept tyre register the road conditions, including weather and road surface conditions, and communicate this information to the car as well as to other vehicles to enhance safety. Also, leveraging Goodyear’s tread wear and pressure monitoring technology, sensors regulate the wear of the tyre to extend mileage.

Elements of the Eagle-360 design showcase biomimicry, which is the imitation of nature, a principle Goodyear often uses in its designs. The tread mimics the pattern of brain coral, and its multidirectional blocks and grooves help to secure a safe contact patch. The grooved bottom has the same elements as a natural sponge, which stiffens when dry yet softens when wet to deliver adequate driving performance and aquaplaning resistance. This texture also absorbs water on the road and ejects water from the tyre footprint through centrifugal force, to reduce the risk of aquaplaning. 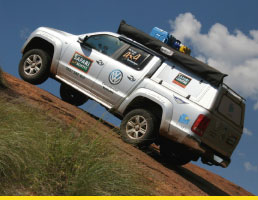 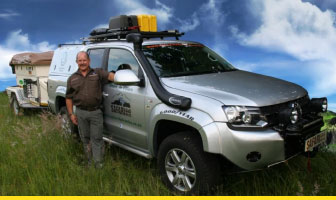 Q: How many seasons of Safari 4x4 Roetes have Goodyear been involved in?

A: Safari 4x4 Roetes is now in its 9th season. I started working with Goodyear in 2011 for tyres to be fitted on the vehicles for the 6th season. I did some testing of my own and found the Goodyear AT/SA+ to be most suited to my needs.

Q: What makes the Goodyear Wrangler AT/SA+ tyres fitted to your Amarok so suitable for use during the filming of your series?

A: I prefer the Goodyear Wrangler AT/SA+ for our type of driving and 4x4ing for a number of reasons. Like most other South African 4x4 enthusiasts, we all drive on tar as well as gravel and then also embark on serious off-roading trips with our vehicles. I’m very impressed with the tyre’s traction, wet and dry braking and road holding.

I do a lot of off-road driving and actually spend more time off-road than on-road, but the distances are much shorter thus the % is lower. I am very impressed with the gravel road performance even at high speed, while towing a trailer. The Wrangler AT/SA+ provides extremely good off-road performance in all types of terrain and I am very pleased with the sand driving ability. I have tested the Goodyear AT/SA+ to its limits and beyond. I can confidently advise the public to purchase the Goodyear Wrangler AT/SA+ for their next journey.

Q: What can viewers expect in Season 9 of Safari 4x4 Roetes, that currently airs on kykNET on Mondays at 17:30?

A: Building on the previous season’s success, Safari 4x4 Roetes this year continues its safari. I will show viewers how to manage off-road driving on difficult terrain, whilst concentrating on showcasing South Africa’s unique opportunities in this regard.

When embarking on a safari, it is always important not to attempt this on your own. Should you encounter difficulty on-route, far from civilisation or a town, you might end up in serious trouble. Bearing this in mind, I’m again taking a special guest on safari during the 9th season of Safari 4x4 Roetes.

We travel to the West coast as well as Northern Cape. I also embark on an extended safari, travelling from Pretoria to a destination on the East coast. It comes with a twist – we only travel along gravel roads, yes it is possible!